Welcome, Miner! You will break rocks, slay monsters, explore an ever-changing landscape, and die lost and alone in the depths of the caverns. Not on some sandy asteroid, but on what we call Lavaland!

Workin' In The Coal Mine 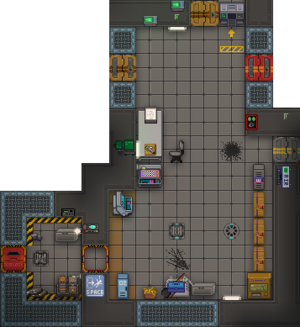 The Mining Dock, connected to Cargo, is your access to the Mining Station.

Being a miner can be somewhat tedious, but you serve a crucial role in the R&D food chain, and can accrue some decent personal rewards. Just follow a few guidelines to keep yourself from becoming dead in the mines.

Your workplace, Lavaland, has several hazards.

The risk of these hazards can be reduced by watching your step and being aware of your surroundings. Don't stand in lava, walk into into chasms, or wander during an ash storm. You'll get a red text warning in chat not long before an ash storm is about to begin, so long as you stay near a structure (or have a bluespace shelter capsule with you) then you'll be fine.

If you’re worried about not being robust enough to notice these hazards, there’s gear and strategies that can mitigate or nullify the danger.

Mining is an excellent job for familiarizing yourself with Hotkey mode (accessible via pressing TAB), as there are multiple opportunities to utilize them while out in the field. Robust miners often end up ALT+clicking a container in their backpack to access its contents, CTRL+clicking their ore box to drag it with them quickly, using SHIFT+E to move their Proto-Kinetic Accelerator in and out of their belt slot, and quickly shifting through intents with the 1-4 numbered keys, among others.

Working With Your Boss

Who is your boss? You answer to the Head of Personnel, much like the rest of Supply -- but usually, you'll just be talking to the Quartermaster or other Miners. He can watch cameras on the Lavaland Mining Base and has full access to Mining, so keep that in mind in case you want access to the Gulag.

You're here to mine, so get digging! Once you've had enough, drag your ore box back to the station and head to cargo where the Ore Redemption Machine

sits. Insert your ID and, drag the box to the yellow indicator on the floor next to the machine to automatically offload your ores and have them instantly processed into sheets. Then click "claim" after clicking on the ORM to retrieve mining points as a reward to your current work ID. Now print new gear from the supply techfab

, then take your crate and head back to Lavaland!

How to Do This

If you’re still unfamiliar with the HUD, it’s explained in the Starter Guide.

You’ll need to know how to view your worn equipment in order to equip new gear. If you can find it, it’s under the Backpack button on the bottom left. (Not the backpack you’re wearing, the other one.)

If you forgot something, don’t worry! The Mining Station has extra mining lockers and ore boxes for exactly this scenario. They even have mining vendors down there!

Mining, of course, isn’t just a cycle of “mine ore, deliver ore, repeat.” There’s a bunch of extra stuff you can do while taking care of your job’s main responsibility.

You start the shift with a complimentary mining voucher, worth one free item pack out of a selection of six. These packs are:

Mining for the sake of it can only get you so far. By mining minerals and returning them to the station you'll accrue mining points; you can then use those points to buy better and more powerful equipment and supplies from an equipment vendor. You can then in turn use these items to push further into Lavaland to mine more minerals, fell stronger wildlife and find greater treasure. Consider it all an investment.

Later, you might find that you're running out of room to store your gear. Here's some ways to save space:

Survival Medipens can help you in a pinch, for example, or a Wormhole Jaunter can help you escape what would have been a death trap. Or you could spend it all on booze and cigars. We won't judge.

The following is a list of default mining equipment. You usually won't have to pay for this:

Items that, while not critical to take, can be situationally useful.

The following are more advanced items that need to be purchased from a mining equipment vendor:

These items can either be acquired from a voucher, or can be bought with mining points.
Mining points are usually earned from delivering ore to the Ore Redemption Machine

The Free Golem ship has some extra goodies:

The following is a list of advanced items that can be unlocked only by RnD, using a combination of minerals and high tech research.
(RnD, if you're reading this - we like the KA Mods, Plasma Cutters, Mining Satchels of Holding, and Night Vision Mesons the best.)

All of this gear is printed out at the supply department Techfab/Protolathe|protolathe/techfab/whatever they’re calling it now.

. It's the thing that isn't the one that crafts basic stuff, okay?

Lavaland has more than just ores. There are several jobs that might want something from Lavaland. (note for future editors: add drops from

It’s recommended that you announce the mob being scanned in the science channel (:n) to notify other miners of what’s already been scanned (and also remind RnD that the miners are helping them, so they should probably research advanced mining already.)

These are what you should be looking out for, generally try and get a good mix of the more exotic ore types. Iron ore is ok, but it sells for little and is highly abundant on the station already.

But if you see Bluespace Crystals, grab them. Diamonds are the only minerals of comparable rarity, and those drop from Watchers.

Some ores can be smelted to produce alloys.

Miners don't have to deliver materials directly to departments -- they can if they want, or if those bastards are too lazy to leave their fortress of autism science -- but it never hurts to know what to aim for.

At this point, you might be thinking, "Why should I help them?"
Well, while not everyone has a way to help you, most of the jobs that you supply can aid you in turn.

Obtained from necropolis chests, which are dropped by necropolis tendrils. You must use a skeleton key, obtained at any mining vendor, to open these chests.
For the bosses' loot, see Megafauna.

Each time you kill a Lavaland enemy with the Proto-Kinetic Crusher, there is a chance that it drops a trophy. These can be attached to your Crusher for unique effects.

Not only can you kill the local fauna, you can also cobble together items from their smashed remains. To craft these, you must open the crafting menu. (This is a major part of playing an Ashwalker.)

Listed here are the recipes that might be useful to miners. Note that Cargo may have bounties that require loot from Lavaland mobs, so it's a good idea to take most creature loot with you.

Lavaland is filled with a variety of bloodthirsty alien lifeforms populating the caverns, walking just fine over the ponds and puddles of lava. Fortunately, you can fight them whilst taking minimal damage, if you have the know-how.
(For instance: All of these enemies will attack shortly after they move. Afterwards, they will have a wide window to be attacked in.)
Useful items can be harvested from these creatures' corpses should you triumph; butcher them with a knife by attacking the corpse on Harm intent and the goods will spill out!

Common Lavaland mobs now have rare mutations. Common mining mobs have a 1% chance on initialize to gain a new appearance and new stats - 5% for legions.

Check out Lavaland/Space_Role for more information.

You're not always the only sentient being on the planet. Aside from the lovecraftian horrors living down there, you may also contend with |several groups or factions of beings on the planet. Some hostile, some friendly.
The following is a list of all known sentient groups found on the planet based on information sent from recon squads.
(As a ghost, if you wish to become one of these, left-click on an unoccupied spawner. ex: broken rejuvenation pods in hospitals, ash walker eggs in their nest, unclaimed Free Golem shells, etc.)
(If you can't find any, try the Spawners Menu, under the Ghost tab.)

(/tg/ has a cool page about these guys, but I can't link it here because the captcha required to post external links is broken.)

Recon Expedition #13
Threat Level: Medium, Hostile
Note: It appears a group of Basiliscus Lizretus, also known as Lizardmen, live on the planet. They are hostile to all intruders. These 'ashwalkers' only started to appear when mining operations started, they are agile but lightly armed, wielding primitively forged armor and spears. They appear to also have a hostile relationship with the wildlife, having been observed killing and dragging wildlife corpses away, as to why they need these corpses the recon team is unable to ascertain.

Recon Expedition #45
Threat Level: Extreme, Hostile
Notes: It has come to attention that the syndicate (direct corporation/group unknown) has recently set up a large compound in Lavaland. This may explain where expedition #38-44 has gone. They are equipped with high end weaponry and has been stated that trace bits of gunpowder has been found around the lava moat that the base is stationed in, suggesting that this base may be wired to self-destruct. We also detected radio waves coming and going from the compound. If found, turn back and report to your superiors immediately.

While on Lavaland, you may come upon artificial structures. They can have items ranging from magical artifacts, to other lifeforms, to alien facehuggers. If you are at all unsure, always let your mining buddies know using :u before going in: some ruins can be very dangerous.

A traitorous miner has a lot of advantages. You have a space suit for free right away and a robust pickaxe. Certain minerals you'll find have more "specialized" uses -- uranium structures will irradiate people, plasma can start fires, gibtonite goes boom, etc. You can also buy dangerous "mining" tools and possibly even revive those monsters you've been fighting. As long as you have some mineral wealth or an ore box with you, no one will suspect your presence around the station, even in highly restricted areas like robotics or toxins, and if you are smart enough, you could get a big stompy mech to drill people to death! In addition, Lavaland is isolated, dangerous, and as expansive as you're willing to dig out. Plenty of room for somebody to get lost in... Forever!

If you're a miner, the Mining Station is the perfect hive for a cult. The back room can easily be broken down by Constructs, runes can be placed, and a single artificer can make it very difficult for Security to try and raid. Remember to cut cameras, so a Non-Asimov AI doesn't bolt and electrocute every door. Remember to use Teleport other to get Cultists off station and into safe custody. All the station needs is a Medibot and you are golden.