Guide to Research and Development

Windows ME Phrases: The Bad Sayings (indication that you've drank too much alcohol, please don't do RnD)

Toxins bombs detonated at the test site generate points through the Tachyon-Doppler Research Array which records the size of the blast. Somehow this generates points. After a change 2018 the maximum amount of points you can get from a bomb and round is 50 000.

The formula returns the delta between the total points generated and the points that would be generated by the bomb. The above graph statically applies whether you detonate the smaller bomb first or last, the downside being that improving your bomb will still reward you but with significantly less points than before. A maxcap bomb (purple), and a 700 (red) and 1000 (orange) radius bomb are marked on the graph with horizontal lines.

Research points are generated at a static rate by the R&D Network (albeit more research points can be generated by the E.X.P.E.R.I-MENTOR) and can be spent on Technology Nodes at the console.

This is what your console will look like at the start of the round. 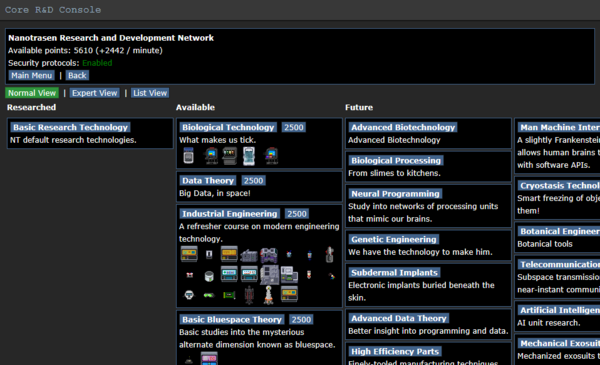 Simply click into any of the technologies to see what it requires and what it unlocks. The number next to each technology represents its cost. To unlock a technology, click the cost to spend your research points on it.

The console will update the screen to reflect your new research and send out a notification in chat.

At the start of a round, if you don't have any other research directives you should strongly research in the following order:

Industrial Engineering is available as soon as you get your first 7500 research points, unlocks tier 2 stock parts for machine upgrades, and unlocks the RPED. It's also a pre-requisite for ALL of the other research items suggested here, so it's probably a good idea to consider doing it first of all. Possibly the biggest benefit for Science from this technology is that that someone can grab an RPED and go update Cargo's Ore Redemption Machine (ORM) immediately after finishing this topic. If the ORM is upgraded before the miners bring back their first load, then right off the bat ore gathered increases 35% and miners get 35% more points to spend on directly upgrading their mining equipment... which ultimately helps them bring in more ore for Science!

Applied Bluespace Research allows miners to get Mining Satchels of Holding and also opens up the Bluespace RPED, which makes machine upgrades (your responsibility!) trivial. This technology is available for 5000 research points after unlocking first-tier research topics Industrial Engineering (7500) and Basic Bluespace Theory (2500). This is also a Tier 3 stock part technology.

The Tier 3 stock part technologies are listed above.

The diagram below gives a quick overview of the suggested early research priorities above.

Certain round circumstances may call for different research early on (such as the lack of miners requiring the need for science to do mining themselves instead), talk to your fellow scientists and listen to your Research Director!

The progression is not linear and many research options require multiple pre-requisite technologies.

To assist in understanding: provided below is a diagram. 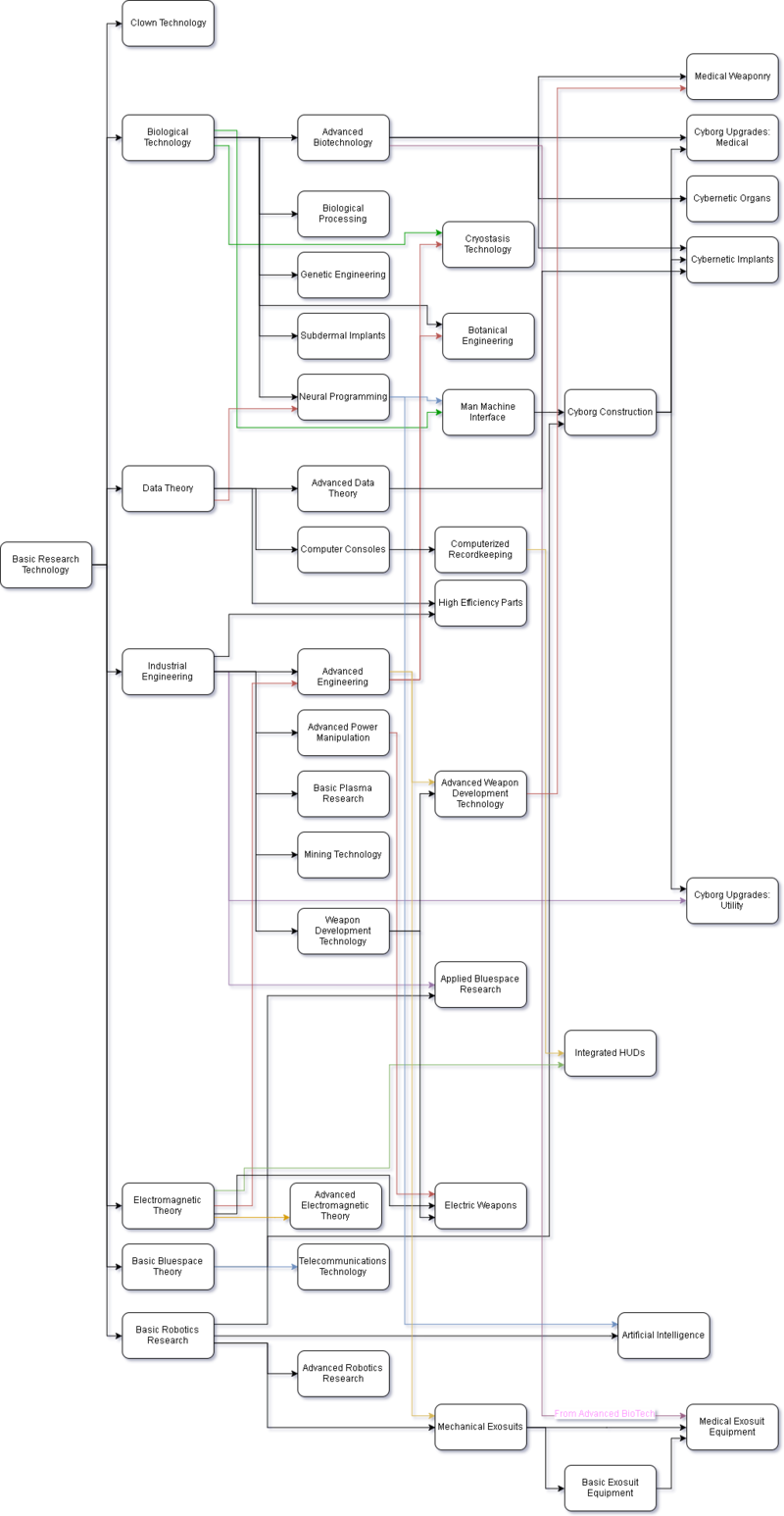 Note: Research tree depicted above is VERY out of date.

Deconstruction is done through the Destructive Analyzer:

The computer will show you the name of the object, if it unlocks any tech nodes, and how many materials you get from deconstruction.

The Destructive Analyzer will recover a portion of the materials contained inside scanned items and transfer it to a connected protolathe. Upgrading it will increase the amount recovered.

Illegal technology, alien technology can only be discovered then researched by inserting a syndicate and/or abductor exclusive item into the Destructive analyzer.

See here how to build machines out of the components you discover. This is where advanced technology you discovered by increasing tech trees will be made. Nothing exciting at first can be built, but you will get increasingly more fun devices as tech trees increase. You will unlock items for the Exosuit Fabricator as well.

All machines are composed of components. There are better versions of many components, attained through research. They are organized in 4 tiers, and upgrading the tier of a machine's components will have different effects for each machine.

Without minerals, you can achieve up to tier 2-3; to go further you'll require ores for production.

Tier 2 parts are all unlocked with "Industrial Engineering," which also unlocks the RPED. Others are unlocked as noted.


Once you unlock advanced components, people around the station will probably want you to upgrade the machinery. Overall, the process is simply replacing obsolete stock parts with higher-tier parts.

The least efficient way is to upgrade by hand. Since the RPED unlocks at the same time as tier 2 parts, there's really no reason to ever do this unless your station for some incomprehensible reason just can't afford an RPED.

As a much more efficient alternative, you can use RPED (Rapid Part Exchange Device), which unlocks with the Industrial Engineering topic. That is, the RPED unlocks as soon as you actually have your first upgraded parts, so you should pretty much always be upgrading with an RPED. The RPED replaces each component in a machine with the highest component of its tier that's loaded in the RPED.

The best alternative is to use the even more advanced Bluespace Rapid Part Exchange Device (BRPED), which functions just like an RPED except that you don't need access to the machine, screwdrivers, or even adjacency! That's right: BRPED works even through camera views. Consider building a camera console in R&D once you have a BRPED instead of running all over the station. This device is unlocked with Applied Bluespace Research and operates as follows:

Here you can see how the specific machines will benefit from parts.

Items available from the start: