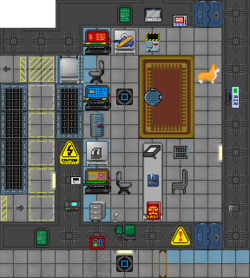 Your office. You sit in it.

Being essentially the right-hand man to the Captain does have its perks. For starters, you spawn in your cozy little office that should keep you sheltered from the derranged lunatics outside. Its almost entirely constructed out of reinforced walls and comes with two layers of shutters to close people out of entering the HoP line (or from leaving it). The only people with access to your office are you and the Captain (usually), so you should be pretty safe if things get messy.

Within your office, you have a plethora of goodies in your locker for the taking, including an Energy Gun, an Armor Vest, and a couple other things like a door remote for controlling Civilian Access doors, a stylish-looking Head of Personnel themed Cloak and spare uniforms for when you need to disguise as yourself.

Have a look at all your unique equipment here. 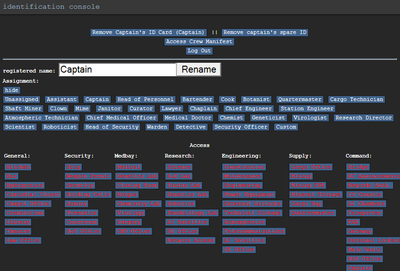 Your ID console, the basic tool of your job.

Your primary purpose is to sit at your desk and process people's requests for access. People often wish to change jobs or require additional access in order to do their job more effectively (or further their dirty Syndicate goals). It's also your responsibility to wipe access from the IDs of troublemakers at the request of other heads.

There are two ways to alter access. On the bottom of the ID console screen, after logging in, there is a list of accesses you can click to grant to or remove from an ID. These are usually access to specific areas of the station, but they may also affect one's ability to use certain ID-locked machines. You can also assign someone directly to a job by clicking "Show" under Assignment; this will bring up a list of potential jobs you can click to assign an ID to as well as a "Custom" option, which is useful for HoPs who want to give crew members special titles, or traitors who want their all-access ID to read "Assistant."

People will come to you with requests ranging from outlandish to mundane, so use your brain and ask a Head over the command channel for any objections before assigning someone to their department. Note that you will be held accountable if you give out access to a department without authorization from its head. Use common sense: maintenance access isn't a big deal, access to toxins is.

If you repeatedly ignore other heads of staff, adding people to departments randomly or handing out all access like candy, you can and likely will be contacted by an admin. Repeatedly handing out access to others in a way that causes problems for the station will result in you losing the ability to play as the Head of Personnel, so be mindful of what you do with that access computer.

Your ID console has the ability to open and close slots for the majority of jobs. This is useful for opening infinite clown positions oh god situations where no more positions remain available and helps greatly to stem the sudden influx of 20+ assistants clamoring for access. This is also a good tool to use when somebody who has taken a valuable job is either dead, demoted, traitorous or an all-around useless chucklefuck.

You can also mark jobs as high priority if you feel the situation on the station calls for extra security/engineers/whatever. This is shown to players in the lobby. There is a limit on how many jobs can be prioritized.

If you're feeling creative, make up your own jobs with custom titles and access levels. There's a world of fun gimmicks you can play around with.

You're in charge of the civilian and supply departments. See to it that Cargo isn't ordering ordering things they shouldn't be or smashing into crates and ensure the botanist isn't simply growing drugs instead of supplying the chef with much needed food.

If the real Captain is KIA, MIA, or simply never arrives, the Chain of Command dictates that it is your job to start a massive civil war against Security with your buddies in Cargo step up and assume the position until they return. If this is the case at the start of the round, it is typically wise to make your first order of business the securing of the important items inside the Captain's Quarters: The Captain's Spare ID, the Nuclear Authentication Disk, and the corresponding Pinpointer. Picking up the Hand Teleporter never hurt anybody as well, considering it makes for a powerful escape tool in emergency situations. Do not forget that you will, in fact, need to up your access (preferably to Captain levels) to do so. The Pinpointer is often best left in the hands of the Head of Security or the Warden so that they can find your battered corpse or the perpetrator of your murder -- or track you down if you give them a reason.

Don't take too long to secure the Captain's items, or else the Head of Security or some Assistant will take the mandate of Acting Captain upon themselves. Either way, it's a fight you'll have a hard time winning.

Due to your low workload compared to other heads, it's a good idea to always pay attention to general radio. People will often try to use this to summon you to your office when they need an ID upgrade. Aside from that it never hurts to have an awareness of what's going on around the station. Chat with the crew so they know you're not the stereotypical helmeted all-access mute that has come to epitomize the position.

Just so we're clear. Ian is your little buddy. Protect him from the various dangerous criminals, and make sure he escapes on the shuttle alive. This is your most important job of all.