You are one half of the Maltese Falcon.

Bare minimum requirements: Hang around the bar and provide people with liquids in glass cups. 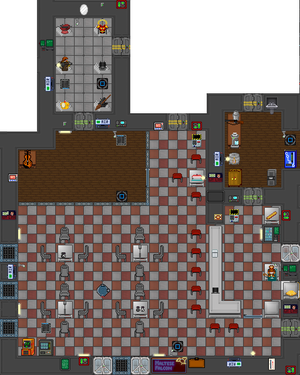 Armor vest: don't underestimate the value of this in blocking damage

A shaker for mixing drinks

Vending machine containing formal uniforms like what you start with, black shoes and top hats. There is an additional top-hat on the bar.

Booze-O-Mat, your ID-locked best friend and container of all that is alcoholic.

Beer keg, beer locker, vending machines and a mixer, all inside your storage room.

Your loyal monkey assistant. Has a tendency to push people around, be abused and get harvested for meat by the chef.

Tapper: This One's For You - Reading this book bestows the ability to throw containers such as glasses and beakers without spilling the contents. The power can be toggled, and the book can be read any number of times.

Drink display, for your special mixes so you don't have to scatter them on the counter like a sleazeball. (Only on some stations)

Your shotgun is double-barrelled. It can hold two shells at once and fire both in quick succession. Clicking it in your hand will break the shotgun, causing the shells inside to fall to the floor. It starts loaded with two beanbag shells, and you start with extra ones in your bag.

You can get more shells using cargo's autolathe. Lethal shells (red) do sixty brute damage, beanbag shells (green) do ten brute damage and knock people down, darts do five toxin damage, and blank (white) shells do nothing. Autolathes can create circular saws, which you can use to saw off your shotgun so it can fit in your bag. If you do this while the gun is loaded, it will go off in your face.

R&D can also produce Stun Shells that act as a Taser Electrode, if putting holes in people isn't your style.

Tending to your Bar

You have a whole bunch of spirits in your handy Booze-o-mat vending machine, with which to mix all manner of drinks. The Vodka in your Booze-o-mat cures some radiation, and Screwdriver can efficiently purge radiation in engineering staff.

Difficulty is minimal, but bar fights can get deadly if your most valued patrons are too drunk to intervene. People also love to murder people having a good time in the bar, especially if you start serving Beepsky Smashes.

Is that NPC Pun Pun too boring for you? Well now you can turn someone into Pun Pun! First take Pun Pun to genetics and get him scanned in those fancy machines. You want to scan UI+UE and SE. Inject the victim willing participant with the SE first and wait til he becomes a monkey. Second inject him with the UI+UE and tada! Player controlled Pun Pun. Take him back to the bar and have him dance on the table tops for space cash. The old Pun Pun can be given to the chef to quench the evil desires of that wretched machine of his. If you want to communicate with the new Pun Pun be sure to get a pAi. If your monkey friend is too quick to leave you don't fret! Monkeys can be handcuffed, so just handcuff him to chair. Now he can NEVER LEAVE!

The chemist has access to, and will usually readily give, most of the chemicals you could want for drinks. In addition, many chemicals have tastes and effects on their own, and can be added to drinks to create flavor/effect combinations that are impossible with just the booze-o-mat and dispensers. For example, thermite tastes like sweet metal, and chlorine trifluoride tastes like burning- both creating delicious drinks that are also serious weapons or tools when thrown.

Serving up a cool glass of pain

Traitor barman has it hard. You only start with Bar access. If you're not in the bar when someone inevitably shows up, expect them to try to break in or call attention to your absence. You have one advantage in that you spawn with a potentially lethal weapon nearby, voiding the need for a revolver or similar item. You'll need the QM or a Cargo Technician's help to get lethal shells, however. They can use your shotgun to bust open locked crates, so see if you can't strike a mutually beneficial deal with them.

Use of an emag and your shotgun may help you for assassinations. It is best to stay around the bar as much as you can, as you will look suspicious if a million people want a drink at the bar.

Some of your drinks can have... beneficial effects. If you get the ingredients for Beepsky Smash or Neurotoxin, you have an instant stun. Or you could just go the old-fashioned down and dirty route and poison drinks outright.