You are a sentient virus, extremely adaptable and resistant to mutations, which has somehow gotten established on this particular Nanotrasen brand space station.

There is a low chance that a random event will take place which will spawn a sentient disease on station. This sentient disease starts off by infecting only a single host, a "Patient Zero" if you will, and has to move quickly to infect as many people as possible. The disease then has to endure the rest of the shift (with the CMO and virologist probably hot on your ass,) in order to maximize its chances of getting a host to CentCom. There's no official notification for the spawning of a sentient disease, so the first few infections should be easy. (especially considering that your infection modifier is relatively stable.)

All sentient diseases have the same two, non-varying objectives: 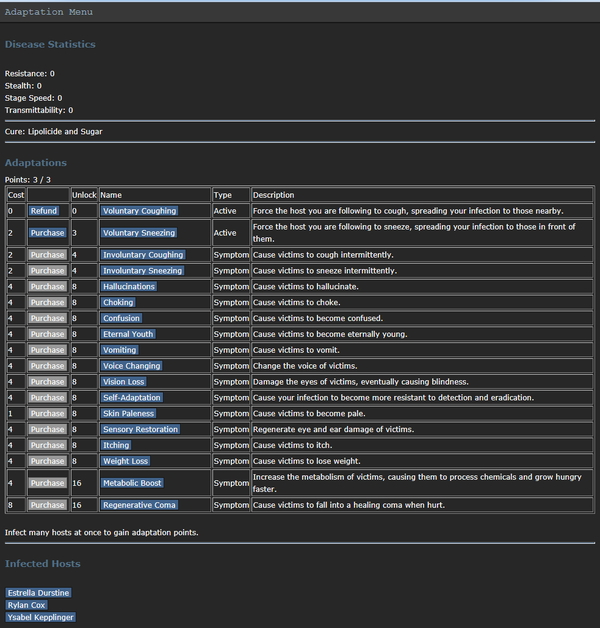 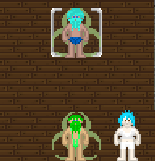 The Sentient Disease spawns with 0 evolution points, gaining more as it infects more hosts. A good portion of the symptoms listed here can be evolved, but not all of them. (imagine how terrifying a sentient disease with brain rot would be) One trait which differentiates a sentient disease from a normal, virology disease is that the sentient disease can evolve more than 6 symptoms.

Each evolved symptom affects 4 stats; stealth, transmission, resistance, and stage speed, which all can change how your disease interacts. For more information, see here. A list of how the various symptoms positively or negatively change these stats can be found in the symptoms table below.

Of worth noting is that viruses can, and often will go become beneficial to the crew, but it almost always requires purchasing various negative symptoms to increase the transmissibility enough so you can actually evolve Regenerative Coma or Sensory Restoration/whatever. Spaceallin can also be useful if you are already infected by the disease.