Quirks are modifiers to your character in Space Station 13. Inspired by similar mechanics from many games (especially roguelikes, ala Cataclysm: Dark Days Ahead), they impact the way you play the game in small (or sometimes large) ways by adding passive mechanical bonuses and drawbacks.

Quirks are modified through the game preferences menu by clicking on Configure Quirks. Doing so will open your quirk setup. 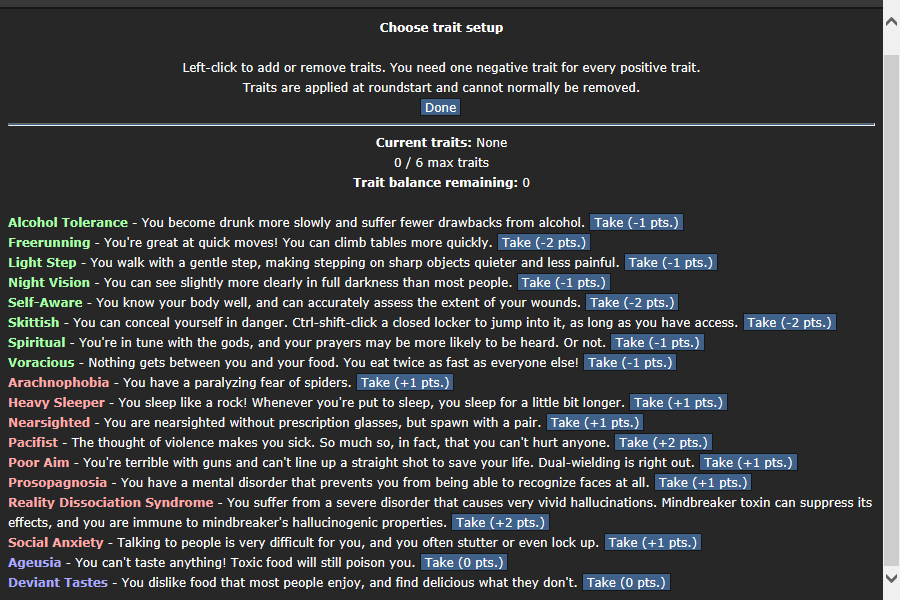 Quirks are organized alphabetically and by quality, in descending order: positive, negative, and neutral. You can see their names, and next to those, a short gameplay descriptor on what they do. To the right of that is a button to either take the quirk or lose it. Whenever you spawn in, either through latejoining or when the round starts, your quirk setup will be locked in - your character will have those quirks until the round ends, and changes you make to the setup during the round will not apply.

Quirks use a point system, called quirk balance, which defaults to 0. This is used to balance the quirks you take, and designed in such a way that every positive quirk requires some drawbacks. Positive quirks take from this balance, negative quirks add to it, and neutral quirks don't affect it at all.

You cannot buy a positive quirk unless you have the balance for it, but you can take any amount of negative quirks. For instance, if you take the Poor Aim quirk, you now have a quirk balance of 1 and can purchase any one quirk that has a balance cost of -1, like Night Vision. If you were to also take Nearsighted, you would have a quirk balance of 2, and could take a quirk with a cost of -2, like Skittish or Self-Aware. In this case, you could also take two quirks that cost -1. Simple stuff!

Regardless of balance points, you can only have six total quirks at a time. Unspent balance is left unused.

Example quirks setup, using the right image as a reference:

Keep in mind that there's nothing forcing you to take the maximum amount of quirks, spend all your points, or even use quirks at all. You are able to enter the game and play even with no quirks, so don't let it concern you too badly!

Below is a list of all positive, negative, and neutral quirks in the game, including their balance costs and actual gameplay effects. If you don't see a quirk on here, that means it's missing - please update the list to include it! Conversely, any quirks on this list that are not in-game have likely been removed, so you are free to remove them from this list to avoid misinformation.

Positive quirks take from quirk balance and have useful or beneficial effects.

Negative quirks add to the quirk balance, and have detrimental effects.

Neutral quirks cost no points and do not impactfully alter the way the game plays.