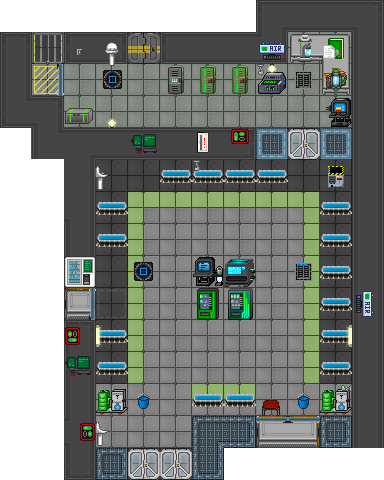 Hydroponics. This is your home.

Hydroponics and the Botanists who work there are important to the station, especially in longer rounds. Botanists grow plants that the Chef can use for food. Without botany, the station will have to live off of beef jerky and space twinkies, or starve to death.

Hydroponics is divided into two rooms. The big section is where you'll spend most of your time growing goods. Trays are available where you grow plants and two vending machines, one with seeds and the other with miscellaneous items such as nutrients and tools for your job. The bio-generator can be used to grind plants and produce things for the station. In tandem is the seed dispenser used to reproduce your product. The northern area is where you can grab most of the equipment needed to work in botany.

Plants require nutrients (fertilizer) and water to grow. They are also bothered by pests and weeds.
Trays come equipped with lights that flash specific colors to tell you what's happening with your plant.

From left to right -

Tools that are of use in botany -

Take some seeds from the vendor and put them into the trays. Now, take a look at the tray with a plant analyzer. For now, you only need to pay attention to the bottom five stats - Water/Nutrition and Weeds/Toxic/Pest levels.
Now, fill a bucket from the water tank and grab fertilizer from the vending machine. You get rid of weeds with the cultivator and remove pests with pest spray. Chemistry can give you better chemicals for this, which will be explained later in the guide.
Some plants have a varied growth times, such as wheat growing faster while watermelons or apple trees take a little longer before you can harvest from them.
Once your tray flashes green, you're set to harvest. If you want to replicate the plant to continue growing more, just insert it into the seed extractor.
You can click seeds with a pen to change the name of the plant, the seed's description, or the plant's description. After planting in a hydroponics tray the tray updates with the name and description of the plant inside it.

The Biogenerator makes items out of the nutriment in plants. As a rule of thumb: More nutriment = more biomass. Watermelons and pumpkins are commonly used due to their 20% nutriment boost trait.
To get biomass, grab a spare bucket and equip the machine with it, then use the plant bag to put fruits inside.
If you somehow run out of fertilizer in the vendors, remember you can print the three standard fertilizers here. Keep in mind that you can craft a whole bunch of useful items from the leather/cloth sheets the biogenerator creates.

The DNA extractor allows you to extract and modify seed stats and traits. This machine is what lets you become a Chemist on speed.

This is a little complex, so look at: Advanced Botany

Three things determine how your plant will turn out: Their stats, reagents and traits.

Stats determine whether your plants are small and grow slowly, or are big and fast-growing.

To get the amount of a given chemical in a plant, multiply the reagent in the chart by the potency: for example, 10% nutriment will be 5 nutriment at 50 potency.

This determines what chemicals are present in a grown plant - the DNA extractor lets you extract and splice these.
With a bit of creativity, you can mix your own mutagen, produce unique healing chemicals or turn tomatoes into napalm grenades. Solid Chemistry knowledge will help you out immensely.
For a detailed list, check out: Plant reference chart

Traits give your plants unique properties. There are plenty - Perennial Growth for example lets you harvest plants multiple times.
These can be transferred, just like reagents.

All you need to know about plants - their reagents, traits and what they can mutate into.

A lot of chemicals influence plants - get these from the vending machine, Chemistry or by growing your own!

Bees greatly increase plant yield, potency and the probability of you getting lynched. Great stuff, and very useful even if you're no traitor!

For more info, click here for the guide on beepeeking.

This is where you get to PLAY GOD and mess with the stats, reagents and traits of plants.

1. Go to the locker in the back and take out the box of plant data disks.
2. Load a disk into the machine along with any seed of choice.
3. Extract any gene, this will destroy the seed and save it to the disk.
4. Put in another seed.
5. You can now modify the seed's stats and genes based on what's on the plant data disk.
Obviously, this can be quite powerful in the right hands, and even for more basic tasks it can be a major boon.

It is worth noting, however, that the DNA manipulator has an upper limit on how high a stat can be when you try to extract it and save it to disk, and any stats higher than that will be brought down to that cap. Though these caps can be lowered or eliminated if you can get RnD to upgrade your machine, at round-start the caps are very bad, with certain stats like production speed being capped at a level worse than what nearly every plant has initially. Traits, on the other hand, can be extracted just fine no matter what parts are used.

You can mutate plants to A) change stats or B) mutate them into a different subspecies. To do this in a timely manner, you'll need to work with the Chemistry department.

Pour 5 units on your plant and prepare for...

Mutating plants has a chance of really ruining stats. Luckily, there are a few ways to fix them:

Trays, whether empty or occupied by plants, can be occasionally overtaken by a weed if their level is 5 or more. In that case the old plant is destroyed, and a new one will sprout in its place.

Growing your own mutagen

Not robust enough to steal a chem dispenser? Try this out.

Other ways to mutagen

Chemistry is busy curing the plague too high to help you out?

Composting enough plants that contain Earthsblood (20 units from plants like Ambrosia Gaia) into a tray will give it a golden shine. Now it will no longer require water, fertilizer or weed/pest removal.

This is great in combination with plants that have the Perennial Growth trait! A lot of Botanists will upgrade their trays before getting started with actual hydroponics.

Upgraded trays permanently contain the last fertilizer you used before the upgrade. Robust Harvest is usually the best choice.

Instead of keeping the original Gaia plant that most likely has gimped stats - insert the Earthsblood production trait into a more robust plant.

If your DNA extractor hasn't been upgraded yet: Wheat has a production speed of 1 and good overall stats. If you're lucky, your station will have 50 potency Wheat bushels just lying around at roundstart.

You can speed up the process by removing all contents but Earthsblood production and adding the Densified Chemicals (Redbeet) trait.

Replica pods can be used to grow dead people back to life - even when their brain and head are missing.

The podmen are a little different from normal humans. E.g. they regenerate in light but suffer in darkness and don't get attacked by bees.

Cabbage can be mutated into Replica Pod.

Of course, this is pretty gimmicky and unreliable.

Kudzu is a weed that can appear when adding 5u Unstable Mutagen to a tray with a weed level of 5 or above. The tray version of kudzu will grow normally in its tray. When harvested it will produce kudzu pods

. The kudzu pod is like any other fruit/vegetable and can be eaten or grinded. To create wild-spreading kudzu, you must put a kudzu pod into a seed extractor, which will create packs of kudzu seeds

. Then activate a kudzu seed in your hand to start planting wild-spreading kudzu on the floor.
Some plant stats will affect the wild-spreading version of kudzu in specific ways:

Killing the last piece of kudzu will create a kudzu seed in its place with all the ackumulated mutations saved in the seed. So if you reactivate it, the new kudzu on the floor will have all the same mutations the seed had, and will spread it to all its progenitors. You can examine a wild kudzu to see what mutations it has. When mutating it typically changes color.
Kudzu can gain mutations only on spread, here is the list of all of them:

Adding special chemicals to the tray when the seeds are growing will affect the specific kudzu mutations:

If you pick up the grass and use it (click on it in your hand), you will prepare astroturf. Get a crowbar and remove some floor tiles, then place astroturf in their place. In addition to looking nice, it can be used to get some sand. Just dig it with your spade and you'll get two piles. Now, pick up the sand and use it; you will make a sandstone brick. Using three bricks, you can make a soil plot, which is like a tray, except you can walk over it and there are no lights. You can also build a sandstone door with 10 bricks.

Science can build hydroponics trays. They can also upgrade them by replacing the matter bins, and this increases the water and nutrient capacity of the tray.

First you need to get some tower-caps, grow them and harvest them. You can then use hatchet (and some other things, but it's not important) on the logs to chop some planks. They have many uses: you can make chairs, tables, wooden floors and so on. A unique thing here is a drying rack. You can use it to dry a plant, and then smoke it. First, build a rack with 10 planks. Then, grab a plant you want to dry and put it in the rack. Click on the rack and toggle drying so that the red arrows light up. Give it a few seconds and it's done.

Note: you can dry any plant, and smoking it will give you all chemicals that were in it. You can smoke dried apples if you want, and get nutriment from them.

You can craft wooden barrels with the crafting menu (under tribal), which requires 30 wood planks

. Clicking it will toggle it between open and closed. When open you can insert plants or liquid. When closed you can draw liquid by using a container on it.
Inserting a plant into the barrel will ferment the plant after a few seconds (even if not closing it). This will grind the plant, adding all the plant's contained reagents to the barrel. But it can also add an additional reagent depending on plant used. Most plants will create a special wine with varied boozepower depending on plant used. Some plants will create other reagents than wine, and some plants will not work at all.

Things You Can Make Out of Your Plants

Since Botany is relatively easy to learn but hard to master, here is an extra guide that focuses on a more practical, step-by-step point of view. Also includes a lot of extra "recipes" for what you can turn your plants into.

[Click here for that long ass bonus guide.] (its old as hell though, and addition of grey bull helps you not need gloves)