PubbyStation was first added to /tg/station's rotation in late 2016. It was created by Pubby, who stated that his goal was "to create a lowpop map derived from my favorite parts of Box and Meta." It shares quite a bit in terms of layout with other popular maps while retaining a distinct identity thanks to its unique design and features. 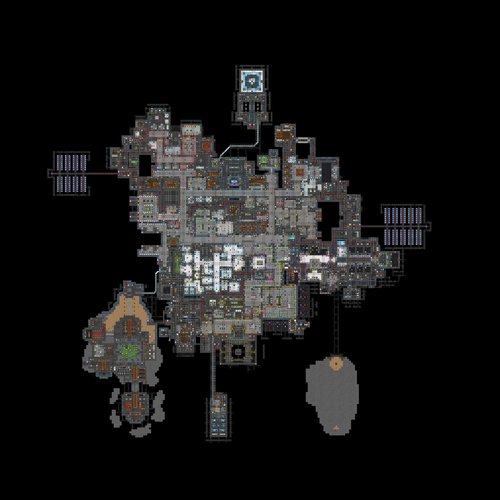 PubbyStation in its current state. Click for full resolution.

Numerous tweaks and refinements have been made since the map's creation by a number of contributors, including Pubby, ShizCalev, 81Denton and others.

In its original form, a number of jobs were missing, including chaplain, curator and lawyer. Pubbystation received two updates soon after its release. In addition to bug fixes and minor additions, these updates included the first appearance of PubbyStation's iconic space monastery as the home for the chaplain.

In mid-2017, a transit tube connecting the station to the monastery was added. Later that summer, PubbyStation received another major update that removed the theater stage during a revamp of the central mess hall. Most notably, the update added a curator wing to the monastery.

The departures bay was redesigned, making room for a law office and allowing people to play as the lawyer. Hydroponics received a public biogenerator, while the engineering department received a new storage room. The science department had a layout change, implementing a single large experiment room to serve as a central hub, with an extra large experiment room added to the xenobiology wing.

In the March of 2019, a controversial pull request that replaced PubbyStation's singularity/tesla engine setup with a supermatter was merged. Supporters of the change purported that it was necessary for game balance, while those opposed lamented the loss of the variety and excitement that the singularity and tesla brought to the game.