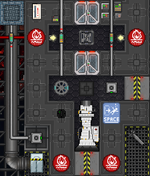 What is the gas turbine

The gas turbine is an alternative way to produce power on the station, and is typically exclusive to Atmospheric Technicians. Unupgraded it is capable of producing upwards of 100 kW if set up correctly and may even produce more power with further upgrades and tinkering. Gas turbines require a lot of pressure to in order to run effectively. This can be accomplished by setting up a burn mix which will create a large amount of pressure when ignited. The burn chamber used for the gas turbine is also commonly used for creating fusion or bombs.

How To Set Up the Turbine

To make the gas turbine generate power, you need to create a burn mix and ignite it. This guide to is based on MetaStation on default setup Aug 2019 without changing any pipes. It's completely unoptimized and is only intended to produce power. This should work on any station with a pre-built turbine.

What to do in atmospherics 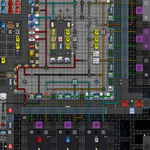 Pipes from atmospherics to the incinerator on MetaStation

What to do in the incinerator room 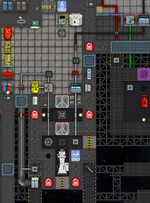 Go to the incinerator room.

Put on a hardsuit and go to space.

Go back inside to the incinerator room.

Without upgrades, the turbine should soon spin up to the max of 125000 RPM and generate power over 100kW. To get more power, print a bluespace RPED

and stock parts from the engineering protolathe and use it to upgrade both the turbine parts and the SMES. At tier 4, it should now be able to produce around 800 kW power, until the oxygen or plasma runs out.