So, for several years, NT has been doing this "plasma research" shit. However, apparently, NT only hired pyromaniacs and terrorists to work with plasma. As such, the identity of plasma is still a mystery, despite my repeated pleas for further funding and a crew that doesn't resemble a prison station full of homicidal maniacs

Despite it's potentially useful properties, harvesting it is volatile and dangerous and the costs involved are enormous, follows is excerpts of reading notes from researcher Dr Pybro that indicate potential earth compounds that could be considered for use where plasma is in use.

Now, when a hydrocarbon burns, it produces CO2, and H2O. Burning Plasma produces ONLY CO2. Thus, Plasma resembles a hydrocarbon. It could be composed ONLY of Hydrogen, and Carbon. Now, it MAY also contain oxygen, but that is variable. Given that we don't actually have water as a gas in SS13, you can just ignore the part about the water. One thing about hydrocarbons, is that they are usually gases, then around hexane, turn to volatile liquids. Plasma, is very fucking volatile (Ever spill a beaker of it? Take my advice: Don't.)

Now, for the number crunching and data.

From here on in, a CANISTER refers to to the large, colored gas containers that you fill TANKS in. A CANISTER needs to be pulled, a TANK can be held in your hand.

NOW, HERE IS THE VARIABLE PART: researchers agreed upon that our test samples had a volume of 1.6 m3. HOWEVER a competing group indicated they thought a single test cell was 2.5m3. Ultimately, using the 2.5 m³ tile messes things up, getting us into a situation where we end up with half a carbon, and, yeah. For the sake of completion, I'll post the math for both.

Using the Ideal Gas Formula (PV=nrt), we can calculate the number of moles of plasma in our test cannister, via some algebra fandangling. PV=nrt/rt = (PV)/(rt)=n. Pressure times volume DIVIDED BY gas constant times temperature equals moles.

This is quite a difference.

((((I also did this for oxygen, but ultimately that data is not needed for this, so yeah)))))

NOW ONTO THE PART THAT INVOLVES FIRE

A full tank of plasma, which contains either 4774.80 mol or 1251.95 mol of plasma at 4559.6 kPa, was pumped into the incinerator burn chamber. An excess of oxygen was then pumped in, and the whole mix was ignited. After it cooled, our brave atmos tech scientist entered. Some time was taken to let the mixture spread throughout the 10 tile area. The area was then scanned.

EVERYTHING IN ITALICS IS CORRECT AS FAR AS PROCEDURE AND METHOD GOES, BUT THE ACTUAL NUMBERS ARE INCORRECT. I'M ONLY KEEPING IT AS AN EXPLANATION OF CONVERTING MOLES OF CO2 TO MOLES OF CARBON.

What the fuck is CO2

Pure hydrocarbon chains exhibit a funny property. By taking the amount of CO2 produced (and thus, carbon), and dividing it by the moles of hydrocarbon you burnt to get said CO2 (and assuming you have 100 % total combustion, no carbon monoxide produced), you can find out how many carbons are in a single mole of the Hydrocarbon!

Thus, the burning of Hexane is:

Which means that a plasma equivalent compound has a structure that looks something like:

With three, two, and one bonding site on each carbon, respectively.

A rant about isotopes

But...Then plasma is just equivalent to a regular derivative of ethane, ethene, or ethyne! "what the fuck pybro you're such a fucking asshole you waste my very precious ten minutes!". Hold up there! Yes, it's just regular ethene, ethane, IF YOU USE 1H, AKA Protium, AKA "Normal hydrogen" AKA "A single proton with an electron buzzing around it". Atoms are composed of protons (positive), electrons (negative), and neutrons (neutral). Isotopes are atoms that have a "deviant" number of neutrons. This messes shit up, and gives isotopes different properties than the "normal" element. Generally (although there are exceptions!), the "normal" isotope has as many neutrons as it does protons. Protium AKA "normal" hydrogen, is one such exception.

Hyrogen has two isotopes. One, Deuterium, which is stable, and forms Deuterium Oxide (D2O), AKA "Heavy Water" (heavy water icecubes don't float on top of liquid water or heavy water, fun fact). Deuterium is a proton, a neutron, and an electron. There is also, TRITIUM, which is two neutrons, a proton, an electron. Tritium is also radioactive. On earth, Tritium is rare. In spess however, it's rather common (the source of tritium on earth is normal hydrogen getting hit by COSMIC RAYS). Tritium is also very toxic.

Hydrogens isotopes are very special, in that they get their own letters! Protium is H, Deuterium is D, and Tritium is T.

I propose that the hydrogens in plasma are actually Tritium. This raises the molecular mass up to the point where you could have a beaker of it as a liquid, but upon spilling it, get a gas. Tritium is toxic, but only when you actually get it in you, despite the fact that it's radioactive, the radiation from it is not strong enough to break your skin, although it might give you skin cancer, but your guts will be fine.

Thus, we know the following:

Thus, I propose that a Plasma equivalent compound with earth chemistry looks something like this: 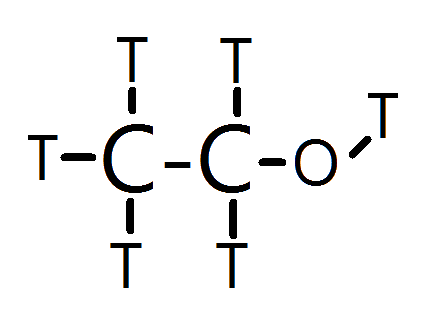 Essentially, Tritiated Ethanol. It's volatile, burns very easily, the Alcohol group at the right (Tritahol?) provides it with enough mass and hydrogen bonding (tritium bonding?) to keep it stable as a liquid, yet is still volatile, and is incredibly bad to drink.

One the equivalent compound is a radioactive element, yes, but the halflife of Tritium is 12.3 YEARS. It is very fucking toxic, and is a great catalyst/solvent. It's not very toxic ON CONTACT, for short periods. But upon ingestion, it basically fucks your whole body up. The biochemistry of this is that your body uses the tritium/tritium oxide to replace your normal protium. Now, Deuterium in large quantities fucks you up because it's heavier than protium, and as such, has interesting effects on your body (and by interesting I mean "bad/deadly"). Now let's make it even heavier, and radioactive. Yeah.

Two, plasma would be rare on Earth, but in a gas giant that's composed mainly of this shit, it'd be produced easily. Even more so if the Plasma-Gas-Giant doesn't have an atmosphere that could block out the cosmic rays.

Three, Tritium has a rather large half life, and even then is rather weak as far as radioactivity goes (you still don't want it in you, however). You can dunk yourself in tritium oxide (T2O), and so long as you don't get any IN YOU, your guts will be fine, you only risk skin cancer.

Four, given that burning the compound only produces CO2 (and water, which is actually Tritium Oxide, aka super-heavy water, aka radio-fucking-active water), it can ONLY have Hydrogen (or isotopes of), Carbon, and oxygen in it. Tritium is necessary to get the weight up into the range where it can be a liquid at standard temperature and pressure AT ALL, while at the same time giving it the necessary toxicity. Plasma gives you TOXIN damage, it does NOT give you oxyloss damage, so it doesn't just suffocate you, it actively attacks your body in SOME way. Ethane (C2H6) does not do this, and is pretty much completely non-toxic. Hell, the only real dangers of ethane are asphyxiation (oxyloss) and igniting it (burn/bomb).

Five, the OH (or OT, as it were) is necessary to also bump up the weight into the range where it can be a liquid/solid at room temperature. It also gives it enough intermolecular forces (the hydrogen/tritium bonding) to aid it being a liquid.

Eight, the combustion equation for this compound would be: