Custom shuttles are a way to build functioning shuttles that can maneuver around the station and other z-levels. While normal space ruin shuttles are free, custom shuttles require fuel and a lot of time to get working properly, so be ready for a huge commitment if you want to fly around on your own private shuttle. 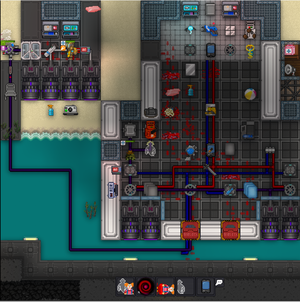 An example of shuttles being used.

Custom shuttles require a lot more maintenance than other shuttles, such as the Whiteship ruin however, they don't require you to get lucky and hope that it spawns.

To start, build the frame of your shuttle.
-The frame must be airtight and all corners must be filled, place walls over where you want your thrusters to be, and remove them later.
-The frame must have at least 1 door.
-Any turfs that extrude from the hull will not be included
-The frame must not include parts of the station (WARNING, THIS INCLUDES THE LATTICES CONNECTED TO THE STATION. DO NOT BUILD OVER THEM)

2. Define the area as a shuttle

Grab your rapid shuttle designator (available from science or engineering) and use it in your hand. If everything worked correctly, the area should be logged and you will be prompted to choose an airlock as the docking port. Great! If everything worked fine move to step 3, if not view the troubleshooting table below.

Now that you have made the shuttle shell, time to build the machines. Firstly, decide where you want your thrusters to go and deconstruct the walls. (You can place thrusters inside but they will rapidly heat and fry everyone on board). Place the thrusters, screwdriver open the panel and wrench to rotate. Now build your shuttles heaters behind the thrusters (If you are using plasma thrusters). You can then use an RPD to build pipes connecting to a connector, where you can plug plasma into the heaters. Finally, build your shuttle flight computer and docker and you are ready to go. They are built like normal computers, and you can find construction information here

Congratulations, if everything went well you now have your own shuttle that you can fly across the system, and make sure to have enough fuel for a return trip, as travelling across z-levels costs a lot of plasma.

After probably about an hour of building, you can finally use your shuttle. Now you better hope no one comes and steals it!
To use the shuttle, use the private navigation computer and target a location. You can jump to other bluespace gigabeacons, even if they are on different z-levels, so build them.
Once you have targetted a destination, pipe some plasma into your engine heaters (if you aren't using void thrusters) and click fly! You should now be soaring hyperspace.

Maybe you don't have the best intentions for your shuttles and want to use them for evil, however, there is a slight issue. The sheer amount of time it takes to build a shuttle makes them almost impossible for normal traitor play, however if you can pull it off you will have an invaluable tool that you can use to jump anywhere on the station almost instantly.

Prison Break - Found a fellow buddy and happen to have a shuttle lying around? Due to their ability to instantly jump to a location and have a breathable atmosphere, shuttles are the perfect tool to break out your buddies from perma. Simple fly the shuttle over, break the window and drag your boy out, before disappearing as security rushes you with their batons set to harm and their weapons set to lethal.
Shuttles are a great place to hide all of your traitor gear since it isn't someplace on station that people will just memorise and know when a wall is fake, as well as their ability to instantly jump to other locations.