The right to a fair trial is one of humanity's basic rights. Unfortunately, we're in space, where basic rights are more like basic suggestions. In Space Law, a trial is only required for capital punishments the Captain or Acting-Captain will not or cannot authorize. In the courtroom, all are equal, and all are subject to justice.

This guide is not an absolute set of instructions. Some truly amazing roleplaying scenarios have come forth from trials that would violate pretty much every rule on proceedings in a realistic setting. Trials are ultimately an opportunity to enhance your roleplaying experience and yell OBJECTION! in a legitimate situation. 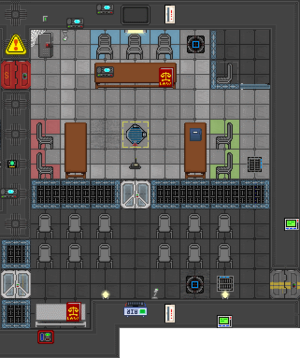 The Courtroom, where most trials are conducted. Green is the Defense, Red the Prosecution and Blue the Judge. The yellow square is the Witness Stand; the glass box can also be used to hold Witnesses if you want to keep them further away from the crowd and Defendant.

The difference between Criminal and Civil Law

Criminal Law: Everything that is explicitly against Space Law. These cases are prepared for entirely in-house by the Security and Command departments, and typically involve crimes against the crew, the station or Nanotrasen itself.

Civil Law: Everything not covered explicitly by Space Law, or that is simply not high profile enough for Security. For example, if the Clown's bike horn is stolen by the Janitor, the Clown can try to sue the Janitor. If the Curator is spreading slander about the Quartermaster, they may get sued over that by the QM. These cases are prepared for by the Law Office, maybe with a bit of help from the Detective.

Roles in the Court Room

There are different ways in which you can conduct a trial. Here are a few examples.

If you've played any of the Ace Attorney games, you know exactly how this style of trial is performed. The key word is speed; this trial system is designed to counter the problems with endless trials that drag on forever, and to process criminals rapidly.

In a Bench Trial, there is no jury. The Prosecution and Defence start with their opening statements, usually reinforced by presenting some basic evidence. At this point, one of both sides will usually call a Witness to the stand. The Witness is always fetched by the Bailiff and their subordinates. At the stand they give their testimony, which is then cross-examined; what this means is that the Defence and Prosecution may point out contradictions in the testimony, or ask the Witness to clarify parts.

The goal for both sides is to convince the Judge of the verdict that benefits them, Guilty for the Prosecution and Not Guilty for the Defence. Once the trial has progressed to a point where there are no mysteries remaining and no evidence or Witnesses left the Judge will deliver this verdict, thus concluding the trial.

If a Jury is present at a trial, they will decide on the verdict instead of the Judge. During the trial, the Jury must be kept separate from the rest of the crew, and be granted plenty of private time to discuss the case. The trial will not end until all members of the Jury vote for the same verdict.

This type of trial completely bypasses all legal systems and is a test of strength between the Defence and the Prosecution. It's simply a fight in which the victorious party decides the verdict. If you want to perform this type of trial, ensure that all involved parties agree and get admin approval.

A mistrial occurs when a trial violates the right procedures. If a mistrial is sustained, the trial ends before a verdict is declared. This does not mean the case is closed, however. Instead, a retrial will be necessary to reach a verdict. A few of the most common causes of a mistrial:

Conflict of Interests: If the Judge or a member of the Jury is directly involved in the case, they may be incapable of delivering an impartial verdict. If the Prosecutor has something to gain with a Not Guilty verdict or the Defence Attorney with a Guilty verdict, they are incapable of carrying out their assigned job.

Hung Jury: No, not that kind of hung. If the Jury fails to reach a verdict even after a reasonable amount of time, the trial might go on indefinitely.

Tampering: If external influence has been exercised on the Judge or the Jury, for instance, bribery or extortion, they will lose their impartiality. Murder falls under Absence.

Misconduct: If someone present in the Court Room behaves in such a way that it prevents due process, the trial cannot proceed normally. For example when the courtroom suddenly explodes.

Absence: If one or more people vital to the proceedings are missing, such as either attorney or a Judge, the trial cannot proceed normally. It might be a good idea to double-check the crew monitor and morgue.

You cannot be prosecuted twice for the same crime. This is called double jeopardy, and it is an important principle in the legal world. Although it means that in theory, once you've been found not guilty for a crime you can never be tried for it again, in practice, you can be retried if new evidence surfaced since the verdict that sheds new light on the case. The reverse holds too; if you were found guilty of a crime, but new evidence may prove your innocence, you can also get retried... Unless you've been executed and turned into burgers, of course.