Guide to the Antimatter Engine

So, you have gotten tired of the SM and the singulo, whats next? WELL KIDDIES, STEP RIGHT UP FOR THE FORGOTTEN (and sometimes necessary when all other options are not available) : ANTIMATTER ENGINE!

The antimatter was ported from /vg/station on October 10, 2016, that's why the sprites look a bit wonky

How to get the antimatter

For this spicy recipe, you will need:

Now, hop down to cargo and ask them for

With all this under your belt, lets get to building!

To construct this thing, ask your local CE or yourself where you can build.

Once you have found a suitable area, open all 3 crates and take a sip of your beverage.

Clear out an area and put a wire connected to the powernet in there like in this picture:

Then, drop 9 of the packaged antimatter reactor sections like shown in this picture:

After that, drag that controller down and wrench it. Take a sip of your beverage and make sure it looks like this:

Its really starting to take its shape now! And, thats how big the AME is.

Once you have done that, your engine should look sick as fuck, like in the picture below:

Take a sip of your drink, and continue with your life and this tutorial 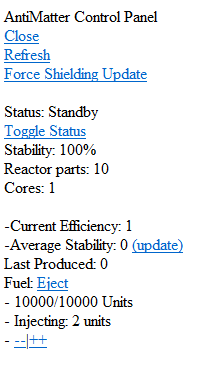 By default, it should be generating exactly 800,000 Watts with just 2 units of antimatter being injected, 4 times more than what the station needs most of the time.

Enjoy your new engine, and dont forget to hook it into the SMESes or you will be probably killed by the crew.

To create more power after the fuel has run out, eject the fuel jar, place a new fuel jar inside, and set the mode to Injecting once more.

Adding segments to the Antimatter Engine will increase the number of cores, in turn allowing you to safely increase injection rate. Remember that this will also cause the engine to deplete fuel faster.

The power produced by an antimatter engine as it is expanded has linear growth, and is given by the formula: (Injection Rate)^2 * 20000 / (Number of Cores). If you are injecting at the maximum rate, this can be simplified to Injection Rate * 40000. Eight cores should be enough to power the station fully at full injection. This will produce 320000 watts. Needs to be tested.